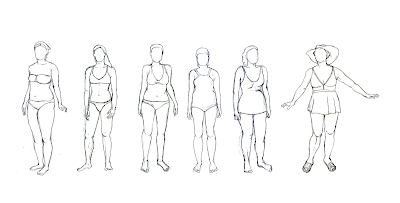 Really quick here...just wanted to do a little post and another plea. I changed the style of my bathing beauties and it is going to be more like Thirty-Eight Self-Portraits (Because I Wish I Were Smaller).

If you sent me a full length bathing suit or underwear photo, you might be able to recognize yourself so far.

I need more though, ladies! Full length, please! Send 'em along!
Posted by Unknown at 11:14 AM 0 comments

Links to this post
Email ThisBlogThis!Share to TwitterShare to FacebookShare to Pinterest
Labels: help wanted, the bathing suit project

Thirty-Eight Self Portraits (Because I Wish I Were Smaller) 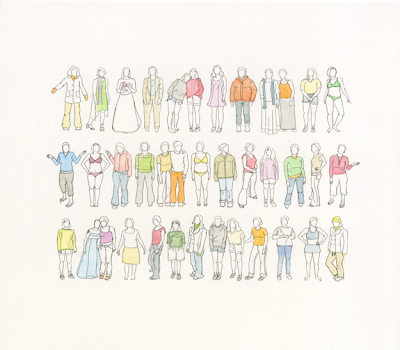 I just entered this in a show...cross your fingers for me...

It's called Thirty-Eight Self Portraits (Because I Wish I Were Smaller), and it measures in at 8 inches by 7 inches. I had so much fun with it. Of course it wasn't so much fun when I was coloring in the third print because the first two didn't look as I wanted and I was racing the clock because the post office was closing in two hours!

Anyway, it's been an especially interesting project about body image, because knowing since about sixth or seventh grade that I wish I had smaller hips or smaller thighs or whatever, and then finding all the pictures, I realized that there were points I thought I should be "smaller" when really I looked pretty darn good.

Keep visiting, because I know I am going to work on more variations and now that I have these thirty-eight drawings of me, I see them being integrated into a lot of other works.
Posted by Unknown at 4:02 PM 5 comments Just a few more. Enjoy. A few more to be added before screenprinting, and hand coloring.
Posted by Unknown at 10:52 AM 3 comments