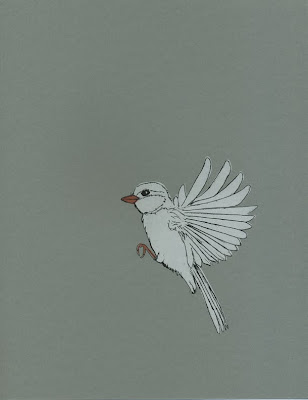 I got some really positive feedback on the bird drawing I did, so I decided that while printing Soldier. Merchant. Man. (4"x6", mixed media on board) that I would also make some prints (Untitled), on paper from the image. I am really excited about them, but I am not sure if they should be worked into further. I like them for their simplicity -- the starkness of the white bird against the gray paper. I like the fact that the bird has just a wide open page to fly on (which now brings me to the desire to print this little bird all alone on a large paper...)

Then part of me thinks they should have something else to them. I'm not sure. Perhaps I need to leave it for a while and come back to it. I think art is so exciting in that way though...how you can work on something, leave it, and then come back to it months later and finally get what you wanted -- or just finally have it come together even though you didn't consciously know what you wanted. Soldier. Merchant. Man. was like that. I worked on it in February (at which time I only did the board using scraps of paper from an old book) and then again in June (?) when I drew the dead baby bird and then finally in August when I added the bird in flight. And it is exactly what I wanted in the end, but I didn't know it at the beginning.

Since I already had the screen made, and I love experimenting, I also pulled a version of it on green fabric. I love that too, but I have no idea what to do with it. 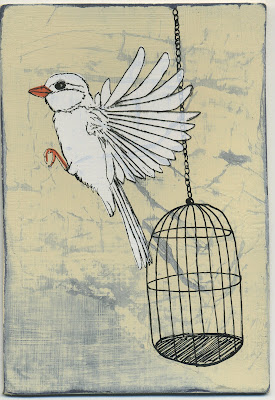 Finally, I had been constantly imagining a piece with a bird and a cage and shrunk the bird to work in Leonard (4"x6", mixed media on board). I like it. This is the second version I did, the first the cage was too high and I couldn't get the bird to balance correctly on the page.

And yes, I don't know what my new obsession with birds is, but they are so elegant and so fragile, I just love using them in my work.
Posted by Unknown at 10:41 AM

i love it plain with the just bird on the dark background. and you're right, it might look even cooler on a bigger canvas with just the small bird on it!


Fantastic items from you, man. I have be mindful your stuff previous to and you are just too excellent. I really like what you have got right here, really like what you're stating and the way by which you say it. You make it enjoyable and you still care for to stay it smart. I can't wait to read much more from you. This is actually a tremendous site. www.gmail.com login